Construction and government cut about 11,400 jobs in July, with construction – a bright area in recent months – eliminating 7,300 positions.

The Bay Area continues to enjoy the lowest jobless rates, with Marin at 5.3% in July. San Mateo and San Francisco followed at 5.7% and 5.9%, respectively.

Despite a better economy and job creation, more than half of the state’s 58 counties reported double-digit jobless rates in July. Agriculture-dependent Imperial County had the highest rate at 26.1%. The county has 19,800 job-seekers, more than double the number in larger Marin County.

The state’s jobless rate dropped to 8.5% in June, compared to 8.6% in May and 10.6% in June 2012, according to the state Employment Development Department. It’s the fifth-consecutive month drop of the unemployment rate.

Seven categories added jobs during the past year, with leisure and hospitality leading the way with 70,800 new positions. Construction had the largest percentage increase at 5.5%, gaining 32,200 jobs.

Construction had 615,500 employees last month, the eighth-consecutive month above 600,000. But the current construction job number pales compared to the peak of 945,100 in February 2006.

Bay Area counties fared the best with the monthly report, with Marin County’s 5.1% jobless rate the lowest in the state. San Mateo, San Francisco and Napa counties finished in second- through fourth-place, each with jobless rates below 6%.

Imperial County has the highest jobless rate at 23.6%.

California’s hard-hit jobless received another dose of bad news –they will lose their federal extension unemployment benefits — some in the next few weeks and all by the end of the year.

A declining jobless rate and improving economy has prompted the move, according to the state Employment Development Department.

About 100,000 people will be affected by the decision in the next few weeks. At least 275,000 more will lose assistance by the end of the year.

More than 750,000 people are collecting jobless benefits in California, with more than half receiving funds from the federal extension program.

California’s three-month jobless rate average has dropped below 9%, the minimum level required for the final 10 weeks of the Tier 4 federal extension, according to federal guidelines.

Anyone who files for the Tier 4 extension on or after Aug. 11 is not eligible for the benefits. Those who apply and are eligible for Tier 4 benefits before Aug. 11 will receive funds until Dec. 28.

Tier 4 benefits assist jobless residents who exhausted their 26-week, state-provided benefits and the first three tiers of the federal extension.

“The EDD knows just how vitally important unemployment benefits can be to out-of-work Californians and their families,” says EDD Chief Deputy Director Sharon Hilliard. “We want to make sure that our customers have as warning as possible about reduced benefits so they can plan their personal finances accordingly.”

All federal extension benefits will end Dec. 29. The federal effort provided unemployment assistance for up to 99 weeks.

California’s jobless rate dropped to 8.6% in May, the lowest level in almost five years – and the 10th-consecutive month of lower or unchanged rates.

The state’s jobless rate was 9.0% in April and 10.7% in May 2012, according to the Employment Development Department. It’s the lowest rate since October 2008.

About 1.61 million Californians were jobless last month – or at least collecting unemployment benefits – the fewest since November 2008, according to the closely watched monthly report.

The professional and businesses services category has added 73,400 jobs during the past year, the most among the seven categories with gains. Construction added 38,500 jobs, a 6.6% increase from a year ago, the largest percentage gain.

Manufacturing, once considered a bright point in the state’s anemic recovery, continues to struggle recently, losing 8,000 jobs during the past year.

Again, the Bay Area boasts the best job market, with Marin County at 4.5%, followed by San Mateo County at 4.9%. San Francisco and Napa counties reported jobless rates of 5.2% and 5.3%, respectively.

Agriculture-dependent Imperial County has the highest jobless rate in the sate at 22.8%.

Californians have endured much-longer periods between jobs in recent years, the latest evidence of the depth of the recession and more specifically the hard-hit construction industry.

Almost half – or 46.1% — of Californians were labeled as long-term unemployed, or 27 consecutive weeks without work. It’s a dramatic increase from the 19.9% in December 2005, according to the state Employment Development Department. 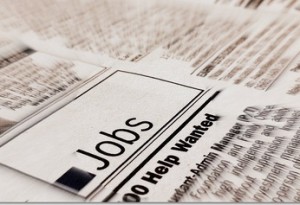 How difficult has the economy been for job seekers? Consider this – almost 40% of residents were without work for less than five weeks before June 2009, basically as they left one position they had little trouble finding work. Now, the long-term jobless have become the biggest category for job seekers, an about-face during the three-year period.

The construction industry’s dramatic decline is the primary reason for the larger-than-average number and percentage of long-term unemployed. The state peaked at 945,100 construction jobs in February 2006, but fell 42.5% to a record-low 543,200 in September 2010.

By the way, the long-term jobless figures –- those without work for 27 weeks — change somewhat by ethnicity at 42.1% for white job seekers and about 54% for African Americans and Asians.