Equity sales – basically deals where homeowners walk away with money in their pocket – increased to 84.7% in August, compared to 82.9% in July and only 62% in August 2012, according to the California Association of Realtors. Equity sales have declined in 18 of the past 19 months.

Equity sales are now at the highest level since November 2007, and short sales were only 10.2% of the market in August, the lowest percentage since February 2009.

Twenty-five of the 38 counties tracked – some counties have too few sales to report – had a monthly decrease of distressed sales in August compared to July, with several counties in the single digits.

Siskiyou and Lake counties had the largest percentage of distressed sales at 37% and 34%, respectively. San Mateo County had the lowest at 3%.

A booming housing market has closed the door on many foreclosures in the Golden State, with less than 1% of mortgages in trouble in July.

A better economy and fast-rising home prices have allowed more financially strapped homeowners to remain rather than walk away from their properties, according to industry tracker Corelogic.

In fact, California, which often battled Arizona and Nevada for the foreclosure title a few years ago, has become one of the best-performing states.

California’s 0.9% foreclosure rate is among the lowest, rivaling Colorado, Nebraska and North Dakota. Wyoming has the lowest rate at 0.4%, followed by Alaska, according to Corelogic.

In comparison, Florida has the highest foreclosure rate at 8.1%, followed by New Jersey and New York at 5.9% and 4.7%, respectively. The national rate was 2.4% in July.

However, California has the second-most foreclosures in the nation during the past year, with about 65,000 homes returning to lenders. But the figure is largely because of the sheer number of homes – and mortgages – in the state. 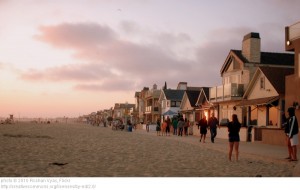 More homeowners are making their monthly mortgage payments and avoiding foreclosure, as fast-rising home prices are easing the number of underwater loans.

Mortgage lenders filed 25,747 notices of default during the second quarter, a 38.7% increase from the first quarter – but also the second-lowest filings in seven years, according to DataQuick. The just-completed quarter is off 53% from second-quarter 2012.

First-quarter filings were the lowest since fourth-quarter 2005, according to the San Diego-based industry tracker.

“At this point in the cycle, it’s fairly straightforward to see what’s going on,” says John Walsh, president of DataQuick. “Just do the math, it’s not calculus, it’s fourth-grade arithmetic. A foreclosure only makes sense when the home is worth less than what is owed on it. As home values rise, fewer homeowners owe more on their homes than the homes are worth.”

California’s median-home price climbed 14.7% to $344,000 during the second quarter, compared to $300,000 in the first quarter, according to DataQuick (the California Association of Realtors has a much higher median price for the quarter). And current home prices are up 27.4% from the $270,000 a year ago.

San Francisco, Santa Clara and San Mateo counties boasted the lowest percentage of homes falling into foreclosure, while Fresno, Riverside and Solano counties were the highest.

Counties with the most-affordable homes – below $200,000 – were the most likely to endure foreclosures, according to DataQuick.

California homeowners are cheering double-digit price gains, but home-shoppers are jeering, as more are unable to purchase their piece of the American Dream.

Fast-rising home prices coupled with higher interest rates – 3.64% today vs. 2.82% a year ago — have greatly curbed the number of families able to buy homes in recent months.

Only 36% of homebuyers could afford the median-priced home during the second quarter, the first time affordability dropped below 40% since third-quarter 2008, according to the California Association of Realtors.

Affordability was at 44% in the first quarter, and 51% in second-quarter 2012, according to the industry association.

How much does fast-rising home prices affect affordability? The average homebuyer needed to earn at least $80,000 to qualify for the median-priced home of $415,770 during the just-completed quarter.

The Bay Area, as always, remains the most difficult market for homebuyers. Only 17% of homebuyers could afford homes during the second quarter in San Francisco and San Mateo. A year ago, about one of every four homeowners could afford a home in those counties.

Santa Barbara was the second-least affordable market at 18%.

Madera County – just north of Fresno – remains the most affordable market, at 71%. But even that county’s affordability has dropped from 77% a year ago.

Almost four of every five home sales (78.2%) were equity transactions in May, meaning the homeowner leaves with some money in her pocket. The current rate compares to 75.6% in April and only 55.8% in May 2012, according to the California Association of Realtors.

It’s a dramatic about-face for the housing market, where more than half of all home deals were distressed sales just a few years ago.

But just as coastal counties are thriving, several inland areas continue to struggle. More than half of Madera County’s deals were distressed sales (52%) in May, followed by nearby Stanislaus County at 40%. And distressed sales were at least one of every three deals last month in six other counties, according to CAR.